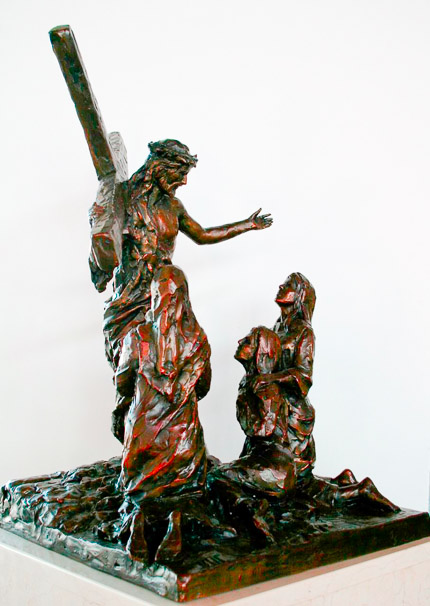 Stations of the Cross

VIII—JESUS CONSOLES THE WOMEN OF JERUSALEM

“And there followed him a great company of people, and of women which also bewailed and lamented him.  But Jesus turning unto them said, Daughters of Jerusalem, weep not for me, but weep for yourselves, and for your children.”  23:27-28

“Stations of the Cross” or “Way of Sorrows” refers to a series of locations along the route of Christ’s final passage, from his appearance before Pilate in Jerusalem to the site of his crucifixion at Calvary.  Instituted through tradition within the Catholic Church the various locations of significance are defined and illustrated with artistic representations, usually sculpture or paintings.  These are located along the interior of most churches to serve as “stations” of prayer and meditation on Christ’s journey of ultimate sacrifice.