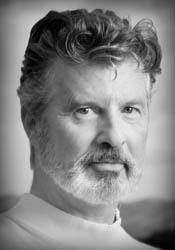 Growing up in Southern California, art and sculpting was an early interest for Kraig.   Something about the visual arts and the artists who created them sparked an excitement inside Kraig.   In his teenage years he completed many small sculpting projects on his own.  At 14 he completed a bust of Lincoln, and by 16 he completed many figurative full studies.  When Kraig cut school as a high school student (like we have heard some boys do) he didn’t head to the beach.  He went to the library and looked at the books about famous artists and the work they produced.

Saturday excursions were to the LA Museum of Art, or the Norton Simon Museum in Pasadena. He took some early employment at a “Rubens” restaurant. There the manager talked about making the dips for parties they catered more appealing.  Soon Kraig volunteered, and was sculpting shells, sea life, and other designs into the cheese dips and seafood spreads.   Once, after completing a beautiful plate of appetizers each with its dip sculpted into a fun design, a complaint came from the restaurant manager.  He took Kraig out in the restaurant and said, “Look!  No one is eating the dips and spreads.  They all look so good, they are all talking about the dishes like they are all artwork or decorations.  We want  them to eat them, not admire them.”  To Kraig this was an easy fix.  Taking a chip from each plate, he took one bite from the side of each dish, and ate it.  Then he stuck one chip in the top of the design.  Soon the appetizers were well on the way to being devoured.

The artwork at Rubens was not always appreciated.  When a new 25 lbs of butter arrived, Kraig sculpted the bust of the mythological creature Pan in the block, the manager did not value it for the creation it was. He said something about needing to use the butter for normal purposes, and put Kraig out on the street.

Kraig’s formal training came from the Fine Art Department at Brigham Young University.  After leaving school he set up a studio in Lehi, Utah.

Kraig is best known for the life-size or heroic-size sculptures that adorn many locations around the State of Utah.   He has been commissioned for many significant works, most notable are the 9′ Brigham Young in the State Capital, the Statue of former Governor Matheson in the Federal Building in downtown Salt Lake City, the James LeVoy Sorenson monument that adorns the entrance of the corporate headquarters of the Medical Institution he pioneered, and the “Children of Lights” sculpture for the 2002 Salt Lake Olympic Games.

Kraig Varner is a successful figurative sculptor who distinguishes himself from others by his ability to master a range of sculpting genres from realistic figures to modern contemporary. His impressionistic work is rich with symbolism and meaning. It conveys poignant aspects of the human experience and emotion.  Kraig has a passion for the human form.

Kraig’s work has been shown in national and international exhibitions, and his work is located in collections throughout the world.

Kraig has established his studio in Alpine, Utah where he has lived and worked since 1998.