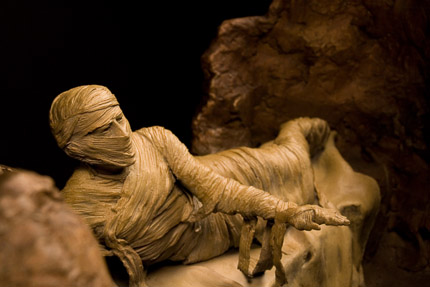 Mary and Martha, the sisters of Lazarus, had sent for Jesus knowing that he could heal their brother who was very sick.  Jesus did not immediately go.  In the long hours when the sisters would have walked outside and looked in the distance searching for Jesus they must have asked themselves over and over, why is he not here?  As Lazarus’ condition worsened they felt the crisis of faith fill their hearts.  Their beloved brother was slipping away from them and still Jesus did not come.  Finally he died.  Their grief was all consuming.  They prepared his body for burial and laid it in a tomb.  The reverberating pounding of the question must have been more than they could bear. When Jesus finally told the apostles that he was going to Bethany, Lazarus had been dead four days.  Jesus knew he was dead.  There was going to be another manifestation of the power of God and Lazarus, who was his friend, was going to be the one through whom that power would be made known.  The moment Jesus approached; Martha ran to him and cried, “Master, if thou wouldst have been here our brother would not have died!”  Jesus lovingly insisted that she remember what he had taught her and in humble submission Martha went to tell Mary that Jesus had come.  Going with the sisters to the tomb one can only imagine what must have been stirring in their minds. Grief and faith must have been at war in their hearts.  Their hearts must have been pounding as Jesus said, “Roll away the stone.”  And then the epoch words were spoken, “Lazarus, Come Forth!” Was it logical that someone could be raised from the dead?  No.  Had it ever happened before?  No. And yet life had returned to his once lifeless body.